only John H. Stimson came in with a background of working in the granite industry.

“About 1830 also, John Stimson, a son-in-law of Zachariah Green, came to Rockport where he also owned stock in the company. It was while he was there that he built the granite barn and put up the first pair of heavy-timbered hoisting shears ever used in the quarries. After a few years he left the Gloucester and Boston Granite Company and began quarrying at Flat Ledge. It was from this quarry that he made his famous shipment of paving blocks to Fort Warren. In 1834, Eames, Stimson & Company was organized, consisting of Ezra Eames, John Stimson, and Beniah Colburn. They continued to quarry at Flat Ledge, but had quarries in Lanesville and Bay View as well. About 1845 Mr. Stimson bought out Ezra Eames, Beniah Colburn, and new partners William J. Torrey and Joshua Sanborn. The latter had worked as a foreman for Mr. Torrey when he first came to Rockport. In 1854 Stimson rigged up the first steam pump, the design for which was brought back from the California gold fields by Lewis Lane of Cape Ann. Other partners in Stimson’s company over many years had been Anson and Aaron Stimson, George R. Bradford, J. Henry Stimson, Abraham Day and Jotham Taylor of Lanesville.”

John Stimson became the chief Agent for the Rockport Granite Company of Massachusetts, he was charged with managing contracts, seeking new business, insuring deliveries were on time, and collecting funds from clients. 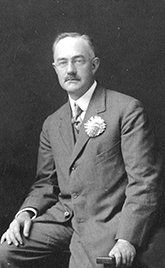 A Monograph by Leslie D. Bartlett

“Quarry Historian Leslie Bartlett now brings to light the glimpses of quarry life and business the Rockport Granite Collection records reveal, in detail. He offers an expanded view of daily life on Cape Ann, when the largest land-based business was ruled by the sounds of granite being broken; and men’s hearts were broken by on-going labor disputes.

The Corporate story of the Rockport Granite Company are contained in documents preserved by Treasurer Louis Rogers. For over 30 years after the company goes bankrupt he holds the records, and then donates them to the Harvard Baker Library, Cambridge, MA. This monograph describes what Louis Rogers preserved, and how, and why he choose to have the records leave Cape Ann in 1953. A fascinating glimpse is offered of how the Rogers family conducted the on-island life of the Rockport Granite Company.

This monograph  reflects Leslie Bartlett’s 50 year fascination with the world of granite quarrying, as he now relates the story of his 4 years research in perusing ‘The Rockport Granite Collection,’ and the important memories evoked.”