Consider…
a timeline of three individuals who might standout out as central figures in the preservation of what the day-to-day life of the granite industry on Cape Ann was like.

Louis Rogers
Final Treasurer of the Rockport Granite Company, he preserved corporate records which he bequeathed to the Harvard Baker Library in April, 1953.

Leslie D. Bartlett
His 2007 installation at the Cape Ann Museum – Chapters on a Quarry Wall reveal the resilient quarry landscapes of Cape Ann for a new generation of Cape Ann natives and visitors alike. And it lead Leslie to spend 10 years researching photography and granite papers at Sandy Bay Historical Society and the Cape Ann Museum; over 3 years in research at Harvard with the materials collected by Louis Rogers, and most recently,  the papers of Barbara Erkkila at the Cape Ann Museum.

Part 6 : Attitudes toward scholarship, research and preservation for the future.

only John H. Stimson came in with a background of working in the granite industry.

“About 1830 also, John Stimson, a son-in-law of Zachariah Green, came to Rockport where he also owned stock in the company. It was while he was there that he built the granite barn and put up the first pair of heavy-timbered hoisting shears ever used in the quarries. After a few years he left the Gloucester and Boston Granite Company and began quarrying at Flat Ledge. It was from this quarry that he made his famous shipment of paving blocks to Fort Warren. In 1834, Eames, Stimson & Company was organized, consisting of Ezra Eames, John Stimson, and Beniah Colburn. They continued to quarry at Flat Ledge, but had quarries in Lanesville and Bay View as well. About 1845 Mr. Stimson bought out Ezra Eames, Beniah Colburn, and new partners William J. Torrey and Joshua Sanborn. The latter had worked as a foreman for Mr. Torrey when he first came to Rockport. In 1854 Stimson rigged up the first steam pump, the design for which was brought back from the California gold fields by Lewis Lane of Cape Ann. Other partners in Stimson’s company over many years had been Anson and Aaron Stimson, George R. Bradford, J. Henry Stimson, Abraham Day and Jotham Taylor of Lanesville.”

John Stimson became the chief Agent for the Rockport Granite Company of Massachusetts, he was charged with managing contracts, seeking new business, insuring deliveries were on time, and collecting funds from clients.

the citizens of Washington is fueled by fear and rumors of a  Confederate Gray army rising like granite blocks up over the horizon. Total destruction of the Union seems at hand…

And Congress votes to spend $1 million dollars to restore the Ford Theatre.

The Rosewell Deportation takes place . The Rosewell Mills provided the Cotton Gray uniform staple for the Confederate Army.
Union troops capture the Rosewell Mill and drive 400 mill workers, all women and children North. Charged with treason they disappear from the face of history and their story remains untold until 1998.

In Rockport on Cape Ann, Massachusetts

The Rockport Granite Company of Massachusetts  readies to incorporate.
With the Civil War drawing to an end. the RGC is poised to deliver millions of paving stones up and down the Eastern Seaboard, playing a vital role in the Reconstruction Era.

The finest sailing vessels and most skilled captains enter employment. 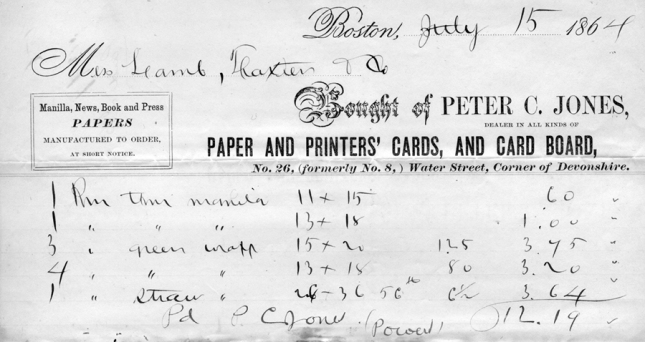 The invoice shown above, shows the Rockport Granite Company of Massachusetts (RGCofM )at its point of Incorporation. The fourth listed item – “4′ “” 13 x 18 – are the very blank books which form a key part of the Rockport Granite Company Collection housed at the Harvard Baker Library. <em>These handwritten and typed volumes are a complete set of the official Board of Directors Monthly Meetings and Annual Shareholders Meetings; they date from August 1864 until the declaration of bankruptcy in 1931.

By July 7, 1864 the investors in what was to become the RGCofM had assembled an impressive inventory of goods, materials and manpower to undertake quarrying on Cape Ann to a scale not previously reckoned.

As we move forward into looking at the collection records more carefully, we will be struck by power of pencil power to account and track ‘the quarrying of stone to bear to market.

Part 3 will examine the backgrounds of the original investors in the RGCoM.

On fourth day of August, 1864, in Boston, Massachusetts, the Rockport Granite Company of Massachusetts is incorporated for the purpose of “carrying on the business of quarrying, and preparing for the market and selling stone.” It is not until 1914 that two amendments are voted onto the original article of Incorporation and the Corporation’s name is shortened to ‘The Rockport Granite Company.’
The chart below lists the original investors, shares and amount of each individual investment.

This was an unprecedented  capitalization in the Cape Ann Granite Industry and it represents the appearance of shrewd determined businessmen who saw golden dollars to be made from the selling of paving stones.

PART 2 arrives April 18, 2017, in which we learn what the RGCof MA was doing during the time prior to its incorporation.

A Monograph by Leslie D. Bartlett

“Quarry Historian Leslie Bartlett now brings to light the glimpses of quarry life and business the Rockport Granite Collection records reveal, in detail. He offers an expanded view of daily life on Cape Ann, when the largest land-based business was ruled by the sounds of granite being broken; and men’s hearts were broken by on-going labor disputes.

The Corporate story of the Rockport Granite Company are contained in documents preserved by Treasurer Louis Rogers. For over 30 years after the company goes bankrupt he holds the records, and then donates them to the Harvard Baker Library, Cambridge, MA. This monograph describes what Louis Rogers preserved, and how, and why he choose to have the records leave Cape Ann in 1953. A fascinating glimpse is offered of how the Rogers family conducted the on-island life of the Rockport Granite Company.

This monograph  reflects Leslie Bartlett’s 50 year fascination with the world of granite quarrying, as he now relates the story of his 4 years research in perusing ‘The Rockport Granite Collection,’ and the important memories evoked.”

A Giant Made Prisoner

“Anastasia stared about her, taking mental notes of the relations of light and shade, and trying to fix in her mind the action of the workmen. Bessie was not so cool. Something oppressed her here, and she quite lost the happy tranquility which she had felt five minutes before, in the straggling country road among the peaceful winter gardens. She felt as if in those few minutes she had come out of the happy New England which she knew and loved – a little country which with all its faults is civilized and human enough – into the midst of some great workshop of nature outside human ways and human knowledge. Here with the dark rocks which they told her had lasted since the beginning of the world, and which had seen more frightful changes than Betsy could imagine. And here, at work among them, was a magical instrument, a giant made prisoner, who was fighting the rocks with another natural force even stronger than theirs. ”